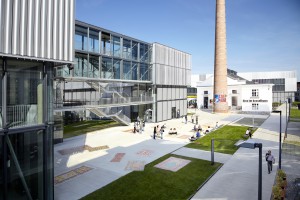 with the National Technical University of Athens – NTUA as an institutional supporter.

ECI’s mission is to improve Communication between the European North and The South, at the citizen level, through Postgraduate Studies / Research and Initiatives that promote European Integration. It is intended for students with achievements and careers in progress, creating networks of graduates with high cohesion and new opportunities for advancement.

Its students attend courses on both the Athens and Vienna campuses and participate in prestigious and high-profile projects and initiatives that highlight cutting-edge issues for the two societies and the Europe of tomorrow.

CET Studies (Communication & Emerging Technologies) are hybrid Postgraduate Programs on subjects defined by the evolving sciences of Technology and Communication.

ECI’s mission is defined in part of a public announcement made in January 2016 in the Old Parliament building in Athens, Greece, in the presence of state officials and the Association of European Internet Publishers –which is a contractual partner of the Institute.

The European Communication Institute is supported by a number of public bodies in the two countries, with the institutional support of the European Parliament in one of its academic directions (“Institutions, Communication and European Integration, M.A.”), as well as the participation of the EP’s Office in Greece, the Delegation of the Commission, ERT, AMNA (Athenian Macedonian News Agency), the Union of European Journalists, ORF (Österreichischer Rundfunk) and others, in a variety of educational activities.

For this purpose, a special unit of knowledge and educational initiatives was created, focusing on Citizen Literacy (term coined by ECI).

ECI’s PGP degrees are awarded by UWK and have full academic recognition in Greece (DOATAP). The Institute, apart from the good testimony from outside, co-organizes initiatives open to Society, develops cutting-edge projects, such as the Creation of the Rules of Ethics of the Greek Electronic Media, makes special publications (‘Communication and Technology’ Series, in collaboration with ‘Papazisis Publishing’), and offers the annual Journalism and Technology Award ‘Giorgos Karagiannis’, in honor of the first president of ARC – ‘Athena’ Research Center, awarded annually in the presence of the President of the Hellenic Republic.